Find Out More
Available to Order Now
New Honda e
From £299 Per Month
We have offers across the range and we are here to help find the best offer for you. We can also tailor a finance solution for you and also organise your part exchange. Please contact us for more information on our great range of offers. Book A Test Drive

This zero-emission, compact and innovative electric car is a modern take on the original Honda Civic and we will be opening reservations in early 2019.

Our Urban E Concept is the true representation of Honda’s ‘We make it simple’ design idea, which aims to make cars closer to people’s hearts.

You’ll be comfortably insulated in a virtually soundless world. There are no gears, just the light touch of the accelerator pedal delivers seamlessly smooth power from a source that’s clean and efficient, with zero emissions. Welcome to a new age of driving a Honda.

Bringing the concept to life.

The Urban E will be Honda’s first mass-produced battery electric vehicle sold in Europe, but electric vehicles have been around for over 100 years in various shapes and forms. The idea isn’t new, but the technology is. Throughout creating the Urban E Concept, our designers and engineers looked at new ways of expressing these ideas and found that simplicity was key. The number of moving parts is dramatically reduced; only a fraction of what you’ll find in a conventional vehicle. That means much greater energy efficiency and less maintenance.

Charging times for electric cars will depend on the size of the car and the battery. The typical charge time for pure-electric cars – using a standard home wall socket – is between six and eight hours. Most

electric cars can also use rapid charging points that can top up the batteries to 80% capacity in around 30 minutes.

Most new electric cars have a range of up to 100 miles and above - depending on battery size. Given that a large percentage of Europeans drive less than 63 miles every day – and the average UK driver travels just 25 miles – then even 100 miles on a single charge is ample for everyday driving.

This was an idea revealed alongside the Urban E Concept in Frankfurt; it’s a smart system that can store energy more efficiently, releasing electricity generated by renewable sources back into the home or selling it back to the grid.

Advanced technology is an integral part of the attractive, minimalist design.

The stunning Honda Urban E electric car, first shown at the 2017 Tokyo Motor Show, is no longer a concept; it’s becoming a reality. So why go electric? Well, electric cars are cheaper to run for starters. There are also significant tax advantages and some healthy Government grants that you can benefit from too. All-in-all, going green will be saving a lot more than just the environment…it’ll be saving you money.

Discover the all-new Urban E at Crown Honda today. You can easily book a test drive via our website by completing the online contact form and a member of our team will get in touch to confirm your time. Alternatively, please feel free to call or visit either of our dealerships in Hendon or Bushey Heath, any day of the week. 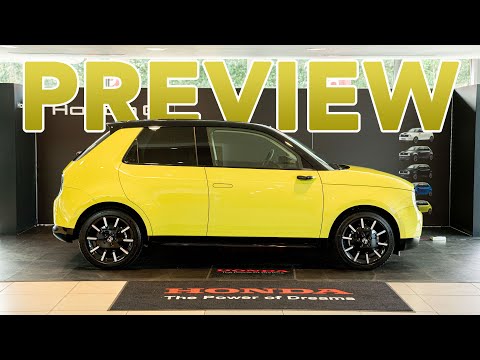 Finance Subject to status. Other offers may be available but cannot be used in conjunction with this offer. We work with a number of carefully selected credit providers who may be able to offer you finance for your purchase. Crown Honda Reg Office: 46-52 High Road Bushey Heath Hertfordshire WD23 1GQ Reg. Company Number: 4759878

Back
Vehicle Valuation
Compare Saved Vehicles
Top
Close
Your Cookie Settings
Select your cookie settings
Strictly Necessary Strictly Necessary cookies are essential to let you move around the website and use its features, such as accessing secure areas, shopping baskets and online billing. These cookies allow our website to provide services at your request.
Performance Performance cookies collect information about how you use our website e.g. which pages you visit most often, and if you experience any error messages. They also allow us to update our website to improve performance and tailor it to your preferences. These cookies do not collect any information that could identify you - all the information collected is anonymous. They will not be used to target adverts to you on other websites.
Functional Functionality cookies are used to remember the choices you make, e.g. your user name, log in details and language preferences. They also remember any customisations you make to the website to give you enhanced, more personal features.
Targeting Targeting cookies collect information about your browsing habits to deliver adverts which are more relevant to you and your interests. They also measure the effectiveness of advertising campaigns.
Save Settings
Cancel Changes

Your settings will take affect when you refresh the page or move to a new page. Find out more about cookies